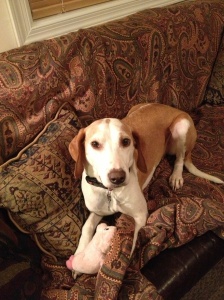 In September of last year, our beloved Joe The Dog (sometimes known as JTD) was tragically and unexpectedly whisked off to the Great Doggy Park in the Sky. He was chasing a squirrel at the time, and failed to notice the SUV bearing down on him. We like to think that he was at least doing something he enjoyed when he died.

The thing is, I looked on Joe as a canine muse. Twice a day, he and I would walk the beach or stomp through forest trails. He would sniff out the delicious smells, forage for crunchy snacks and, occasionally, play fetch or wrestle a bit. I would wander into my alternate universe, peopled by the characters and the stories that I had created. Here was the ideal opportunity to chew on plot tangles, develop personalities and play out dialogue and action.

His departure didn’t stop me writing, but it certainly did slow things down. I thought I might continue the walks on my own, but the motivation was gone and I found it hard to be accompanied by JTD’s ghost everywhere I went.

Time past. We decided not to get another dog. “They are such a tie,” we said. “They take up so much time,” we said. “They are so expensive,” we said. And yet. Without any previous discussion, we discovered one day that we were both thinking that the time had come. Enter Heather The Hound (HTH). Heather’s early family history is a blank sheet. She was almost certainly bred as a hunting dog (she is a Harrier mix) and then dumped somewhere in North Carolina or Southern Virginia. She was rescued from an ignominious death at the Dog Pound by our local Animal Welfare League and then we happened along. So far, both parties in the arrangement are ecstatically happy. I get my dog-walking time back, we have a dog to keep us company on the sofa when we watch TV in the evening and Heather gets a new pack which offers her comfort, care, security and love.